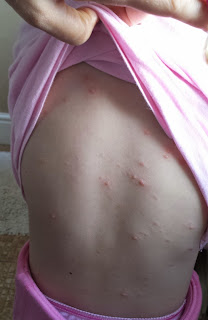 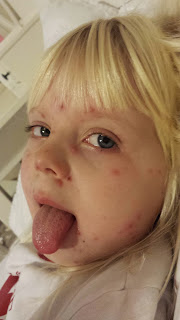 "Fooking 'ell I'm sweaty," Ava said one evening whilst watching Adventure Time. After falling off the chair in shock and yelling at Superdad for dropping an f-bomb on some day that she'd obviously parroted - and trying my best to stifle a giggle because it was the cutest f-bomb I'd ever heard - I checked her temperature with the back of my hand on her forehead. (This was very gently of course...I didn't belt her backwards off the sofa for her bad language). Fever was the first indication that my three year old was falling ill. The second indication was when Superdad paraded her in front of me (at arm's length) and pointed out the lurgy developing on her belly.
﻿

"Ava has The Pox," he cringed.
"Wa's The Pox?" Ava asked.
"You have Chickenpox, sweetie," I explained.
Her eyes sprung open wide and she cried, "But I don't want to turn into a chickeeeennnnnnnn!"
"Its okay Aves," said Superdad. "If you cough you'll lay me some eggs."
I narrowed my eyes as Ava looked ready to pass out.
"And if you need a poop, they'll be Kinder Eggs!"
Aaaaaaaaaaaaaand Ava was manoeuvred away from Daddy before she went clucking nuts.

Most Supermams - at the first hint of illness - go into cuddle and rescue mode. Suddenly Little-Miss-Independent actually wants us to take care of her and - although none of us want our Gremlins to be ill - it feels nice to be needed and have a good reason not to do the housework because our little patient needs us to put our onesies on and snuggle with them on the sofa all day. If we're not scraping sick off the carpet with a dustpan, we're wiping diarrhoea off the radiator or cleaning the piddly bed sheets. Though when it comes to highly contagious diseases, I put at least four feet between us at all times and food/drink/blankets get lobbed at her from afar. Though I think Ava must sense the distance that I'm trying to put between us as she insists on stalking me for kisses with her contaminated perma-pout, while I slyly whisper to her...."Daddy feels sad because he wants all your kisses...."

The next stage of parental sick duty is of course....morrrre sleepless nights...and the likelihood of a germ-filled Gremlin taking over the sanctuary that was your bed. Even doped up with Calpol, Ava would prise open my eyes to ask me to "scratch her foof" every half an hour, then the following morning at 9am she'd have the cheek to ask Daddy for a nap when I had to head off to work resembling The Walking Dead.

I've heard that some people have Chicken Pox parties when their tot breaks out in the blistery pimples, as they think its best for their babe to "catch it when they're little". No. No. No. No! Having had Chicken Pox at the age of one, I couldn't remember what it felt like and thought it was just an outbreak of annoying itchy spots that's worse in adults than children. After bearing witness to my poorly child scream for five hours because her "dots are hurting" - and being unable to eat due to nausea and the blisters in her mouth - I would never recommend purposefully inflicting the condition on a little person. Two days of ice cream might sound like the perfect weekend to us, but not to a starving toddler with a mouth full of "bee stings" - especially over Halloween. We didn't have to dress her up and we got to scoff all the Haribos, but it wasn't a pleasure watching our daughter rub her bum on the dog to scratch the parts she couldn't reach.

After five days of uncomfortable squiggling, misery and cabin fever, the itchy spots dried out and morphed into multiple brown scabs. My daughter was finally able to return to society (ie nursery) just in time for her first school photo to be taken. I asked the photographer if he had photoshop? I'm sure he did, but he chose not to make use of it. I've never seen a more cute dot to dot picture. I've drawn numbers on the spare ones.

And just as our exhausted heads touched our freshly-bleached pillows in anticipation of an unbroken seven hours kip...the other one drones "maaaaaaaaam I don't feel well......"

Aaaaaaaaaand it all begins again.... 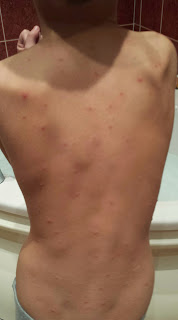 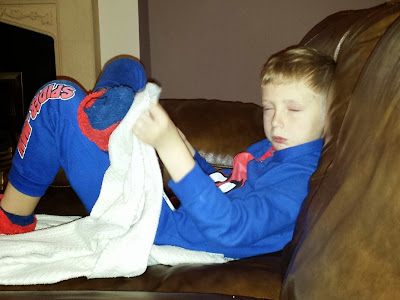 As Owen perfects the "sick face" that's the doppelganger of Daddy's "man flu face", Ava forgets what it feels like to be the patient as she launches toy cars off his speckled forehead. The novelty of a week off school soon wore off when his little sister launched Operation Kick-Owen-And-Run-Away and Supermam and Dad had to intervene after a chorus of -

And neither of the little germbags bestow sympathy or patience when their mother is afflicted with an ailment that probably originated from toddler snot mopping in the first place. No. Mammy still has to drag her aching old bones out of bed to tend to Gremlins' every daily need. On our death bed we'd be buttering bread for tomorrow's packed lunch. Daddy - however - would pull on two Slankets, impart "the cough", groan and whisper his request for some Morphine at the first sign of a sniffle. But unfortunately for Dad, Supermam's sympathy does not extend to the Man-Child. He's banished to the spare room with a pint of water and two paracetamol until the whimpers subside and he feels strong enough to open his eyes without sticking his tongue out... 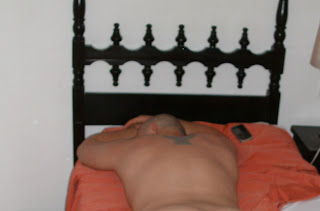 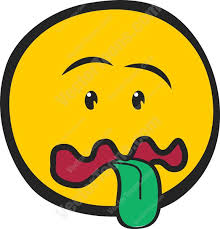 Posted by Unknown at 9:46 pm No comments: